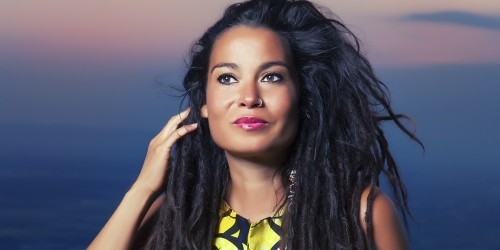 With a musician as a father, Italian-German singer Monia began her music career as a songwriter in the studio singing on soulful tracks, playing guitar, flute and piano. She was soon regularly singing in great bands like The Right Thing and KJ Dallaway & Friends. In 2011 she joined with producer/composer Randall Hutchins to form the dynamic duo of Monia & Hutch. The duo quickly became an international success, performing for top clubs, hotels and cruise lines. With the duo, Monia has thrilled and awed Japanese, Australian, American and British audiences for the past 6 years and she is in production on the first duo CD and her first solo CD release. With her singing duo she has been invited to perform several years at the Dusseldorf Jazz Rally, the International Filmbienale in Berlin and other events. Monia was also a cast member in the international stage shows “Black & White” (a Michael Jackson Tribute show) and “Superstition On Stage” (a tribute to the music of Stevie Wonder). Monia finds painting to be a source of inspiration for her music. From 1998 to 2002 she studied art at the Freie Kunstakademie Mannheim. She organically discovered the technique and art form of tachism (French: la tache = the splotch) and she has a preference for lyrical abstract (French: art informel). She directs the eye of the observer to the use of the color material. The paintings seem to be understood as evolving progression and unceasing motion. Clearly visible brush strokes combined with intense color creates an experience purity. She enjoys teaching art and she has been an art instructor at the Jugendkunstschule Heidelberg since 2007. Influences: Some of her favorite painters are: Gerhard Richter, Van Gough and Miro to name a few. Musically, she was influenced by artists like: Carol King, Weather Report, Angela Bofill, Chic Corea, Laura Nyro and Bob Marley.